Why are leeks expensive?  It might be their long growing season, four to five months from seeding to harvest.  That’s a long time to take up market garden real estate.  Or it might be the extra care it takes to germinate the seed and grow seedlings to the point when they
can be transplanted, six or seven weeks in my garden.  Then there’s transplanting them and keeping the soil hilled up around the growing shaft to encourage as much tender, white leek as possible.  Having someone else do this work for you helps explain the cost, but if you like lots of leeks and want to spend your time instead of your money, you can grow them yourself.

I wasn’t particularly successful at growing leeks until I adopted Steve Solomon’s method outlined in his Growing Vegetables West of the Cascades.  If you don’t have his book, now in its 6th edition, and you want to grow leeks, buy it.  It will pay for itself in leeks the first year.

Following his instructions for winter leeks, in late May I work compost into a four-by-four foot area in the garden until the soil is light and mark out five rows.  Then I plant the seeds a half-inch apart in shallow furrows, cover them with half an inch of soil and spread Reemay over the bed. Varieties I’ve grown the past few years are King Sieg and Bleu de Solaize, both from Fedco Seeds and both very winter hardy. This year I’ve also planted Carantan from Pinetree Seeds, an heirloom reputed to be winter hardy as well.

I water the bed often to keep the soil moist and in a week or two the thin green threads of leeks are folding out of the ground.  I keep them covered with Reemay until the shoots have several strong leaves.  By mid-July, they are nearly the size of pencils and ready to transplant. 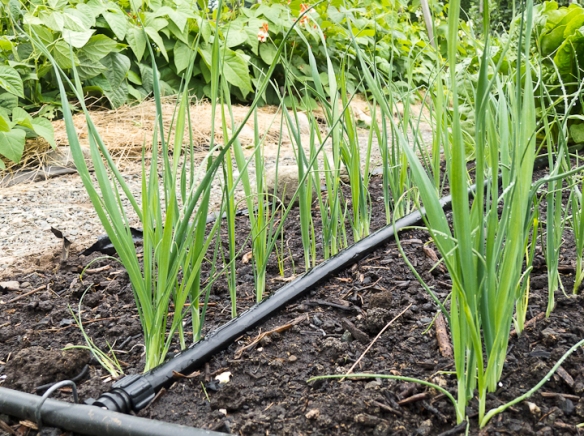 Transplanting is where Solomon’s instructions are most valuable, and the process is enough fun that I look forward to it each year.  I’ve modified his instructions to include a board that supports the leeks as I set them out and helps prevent dirt from falling into the leaf joints.  Also, rather than running a series of rows perpendicular to the long side of a bed as he describes, I plant three rows parallel to long side of the bed because this pattern matches my irrigation tape.

The first step is clipping off the top half of the seedlings. Solomon explains that altering the ratio of leaf area to root reduces the disturbed root system’s demand for water and allows the plants to resume growing more quickly.  After clipping the tops, I gently dig a couple dozen plants, placing them in a small bucket and keeping the roots covered with dirt or water. 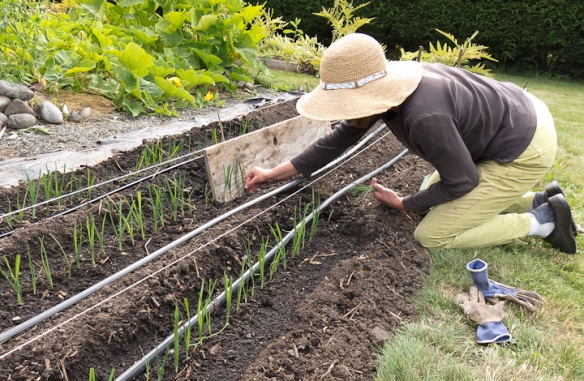 As the photo shows, I dig an eight-inch deep trench, prop the board against some bamboo stakes at a slight angle in the trench, and lay the leek seedlings along the board, spacing them at two-inch intervals marked on the board and stretching the roots out along the surface of the soil.  I cover the roots with about an inch of soil and press down gently.  Then I pull the board toward me, brush another inch of soil behind it and firm the soil down.  Then—this is the magic part—I pull up the board and the leeks are upright and clean.  I firm the soil around any that look wobbly and water them thoroughly.  The four-foot board lets me transplant twenty-four leeks at a time so I try to dig only as many transplants as I need for each board section.

Every week, I fill in the trench around the growing leeks, being careful not to knock dirt into the joints between the leaves.  In six weeks or so, the trenches are full and I begin hilling up the soil around the shafts up to the first leaf joint to blanch them white. By early October, the leeks will be ready to harvest and, even better, they will hold throughout the winter.

As I transplant leeks and care for them over the summer months, I imagine favorite winter meals: Pan-Roasted Pork Loin with Leeks from Marcella’s Italian Kitchen (1986), one of those simple but exquisite flavor combinations Italian cooks like Marcella Hazan do so well. And Leek Tart from Alice Water’s Chez Panisse Vegetables (1996): just leeks in pastry, no cream, no cheese, just a little thyme.  These and other leek-filled dishes are what keep me growing leeks each year.