Some vegetables are mysteriously expensive and others are just mysterious.  Fava beans fall into the mysterious category.  More than any other plant in my garden they draw the “what’s that?” reaction from visitors as they point to the rangy, floppy-leafed plants with the shiny, spear-like pods protruding from the stems. 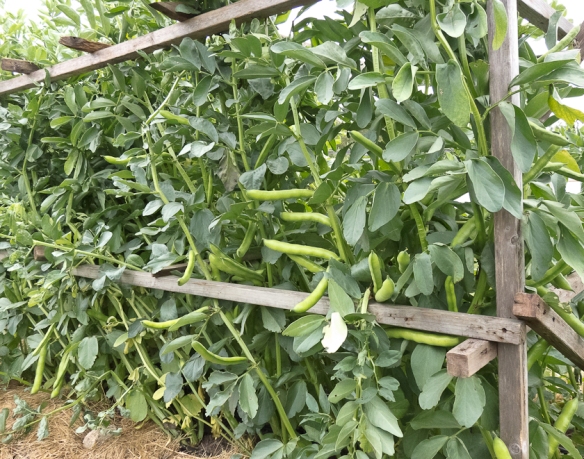 My answer usually involves pulling off a pod and opening it to reveal large, light green beans nestled in a row against the spongy white interior of the pod.  If people want to taste one, I’ll pop out a bean and peel off the light green outer skin, revealing the bright, darker green bean inside. A raw fava bean has a sharp taste with an earthy, nutty undertone, completely new for many people.  They are tasty raw with olive oil and salty cheese. “Cooked,” I add, “the sharp taste mellows but the earthy, nutty flavor remains.” At this point, I either make a convert to fava beans or we move on to something a little more familiar tasting.

While their mysterious appearance is a fun reason to grow fava beans, it’s their taste and the fact that they are my husband Scott’s favorite bean that keep me growing them each year.  But getting to that taste once you’ve harvested the pods does involve those two steps of shelling the bean from the pod and then removing the skin from the bean.  For some, even the great taste isn’t worth the fuss, but for the rest of us fava lovers it’s more then worth the time spent.

As they begin to ripen, I’ll pick a two or three pounds of pods to prepare for dinner, selecting the pods that are fullest because they contain the most mature, most flavorful beans.  Before starting to shell them, I’ll put a pot of water on to boil.  By the time I’ve finished shelling the bean from the pods, the water is boiling and I blanch the beans for one minute, just long enough to loosen the outer skin.  I drain the beans, chill them briefly in ice water, drain them again and finally slip the beans from the skins.  The photo shows the progression from pod to shiny green bean. 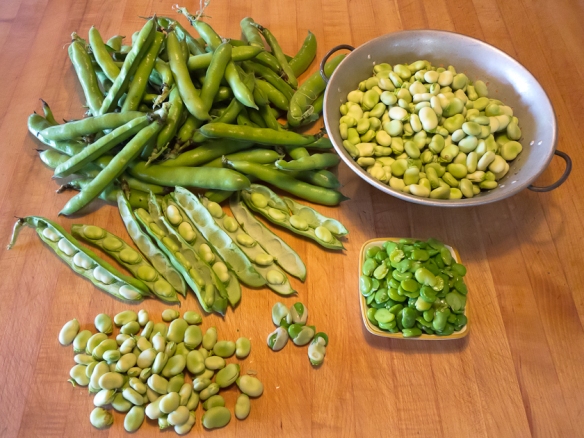 At this point, I usually cook them a little longer to fully soften the bean.  I put them in a skillet with a little water, less than ¼ inch, and let them simmer until the water evaporates and the beans are fully tender but still bright green.  A little olive oil, chopped garlic, chopped rosemary and some salt and they are ready to enjoy as a side dish, pureed into a dip, or mixed with other vegetables.  My friends Kevin and Mary add them to a salad of early potatoes, tarragon and feta.  Most delicious!  Favas also pair wonderfully with other vegetables that ripen about the same time: asparagus, artichokes, peas, spring onions are great complimentary flavors.

I grow a lot of fava beans—usually four ten-foot rows.  That means that at a certain point there are a lot of ripe fava beans.  I set aside a morning and pick all that are ripe, shell, blanch, chill, slip out beans and pack them in pint freezer bags.  This year, fifty pounds of favas in the pod ended up as sixteen ten-ounce packets for the freezer.  Not a huge return but still a special treat to enjoy throughout the winter as puree, in soups or mixed with roasted roots or hearty greens.

I’ll write more about growing fava beans when I plant next year’s crop in late September. The variety I plant most years is Broad Windsor if you want to get some seeds and be ready to plant this fall.

Finally, seed catalogs and cookbooks often mention that a very small percentage of people of Mediterranean, Asian or African descent may have an allergic reaction to fava beans, so pay attention to any allergic symptoms the first time you eat favas or serve them to friends.