We call ourselves bean heads, others call us bean queens, but really my friend Carol and I just like growing and eating beans.  As I wrote a few years ago, beans have always had a place in my kitchen garden: https://lopezislandkitchengardens.wordpress.com/green-living-columns-2/beans/ and as Carol’s story reveals, she is an even more serious bean lover than I am: https://lopezislandkitchengardens.wordpress.com/yes-you-can-grow-dried-beans-on-lopez/. This past week, we drew a few friends into our love of beans with a bean tasting.

The subjects of our tasting were twenty of the 127 varieties of beans Carol grew this year in her trials plus a few from my garden, old favorites and new varieties Carol had given me.  We were focusing on shell beans, beans that are fully formed in the pod but not yet dry, in part because, as Carol said, “I learned about them accidentally years ago when frost was threatening, the beans weren’t dry and I ate some. Get the word out there!  They are wonderful.”

They don’t need to be soaked but just boiled until tender, anywhere from ten to twenty minutes depending on size.  Any bean grown for drying can be eaten at the shell stage but as we discussed during our noontime tasting, many taste different, even taste better, at this fresh, shell stage.

Carol and I cooked the beans just before the tasting and set them out in labeled bowls and jars.  Armed with charts to record the name, flavor and texture of each bean, we all went to work.

Even before tasting the beans, we delighted in their names. Next to homey names like Ma Williams, Good Mother Stallard, Uncle Steve’s Italian Pole and Aunt Jean’s Pole there were Turkey Gizzard, Tobacco Worm, Tennessee Cutshort, Uzice Speckled Wax, Zlatac, Insuk’s Wang Kong, Soissons Vert.  All of these names reflect Carol’s focus this year on beans from Europe and Southern Appalachia. There were also three runner beans, Chestnut, Sunset and White, popular in Britain, Carol explained, and great choices for the Northwest because they are tolerant of cold and they taste good as green, shell or dry beans.

As we tasted, we filled the flavor column with words like earthy, nutty, sweet, fresh, lima-like and the texture column with words like creamy, meaty, mealy, buttery, dry.  Because Carol was growing just a few of each variety, our samples of each bean were small, sometimes a bean a piece, but that was enough to start to differentiate the beans from each other.

Taking breaks from tasting, we admired the bean pods Carol had brought along, all labeled so we could match the pod with the bean.  Part of the pleasure of growing beans is discovering what kind of bean is hidden within the pod.  Sometimes there’s a match of pod and bean, especially with the dramatically striped red and white pods and beans, but often a drab pod hides a brightly colored bean. 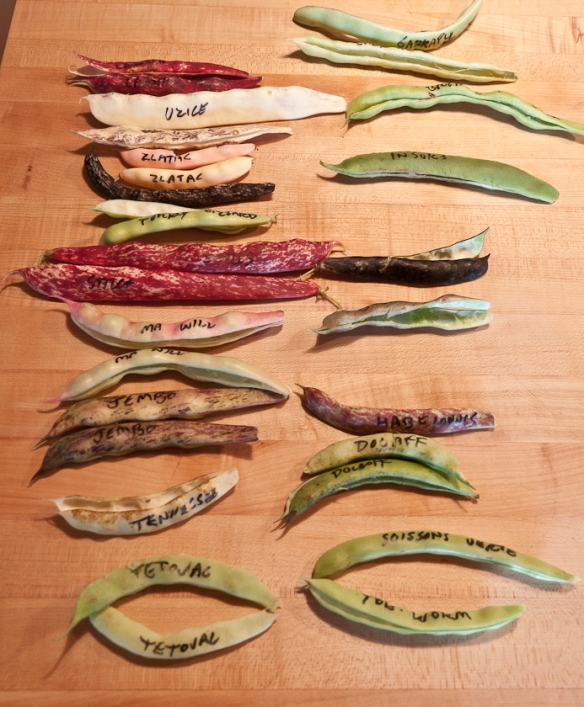 In the end, a few favorites emerged.  One was Good Mother Stallard, a beautiful medium-sized nearly round red and white bean that reminded people of the flavor of pecans or hickory nuts.  Another was Soissons Vert, a gorgeous green pole flagelot bean with a buttery flavor.  And everyone liked the runner beans, perhaps because they were the biggest bean and usually the most colorful.

White, Sunset and a medley of Runner Beans

At the end of our tasting, we mixed the remaining beans together, added them to a skillet of sweet corn kernels and enjoyed a lunch of succotash, one of the best reasons to grow shell beans.

Carol plans to add the results of her 2011 bean trials to the 2010 trial and seed source information on file now in the reference section at the Lopez Island Library.  If you want to grow dried beans on Lopez, and even start to call yourself a bean head, look for this useful information and start planning for next year.