I harvested winter squash on the Fall Equinox this year, a beautiful warm day like so many we’ve had this September.  The plants’ big, floppy leaves had begun to mildew and collapse over the past week, revealing the squash that had been growing slowly, swelling and hardening, developing their colors, all summer.  They were easy to spot now along the vines that crisscrossed the two beds.

Because I was trying some new varieties this year that looked quite a bit like my regular varieties, I followed the vines from each hill, picking all of one variety, piling them into a wheelbarrow and transporting them to the porch before moving on to the next variety.  As I lined up each variety on the steps, a portrait of the 2012 squash class began to take shape.  Squash are so photogenic and this year’s class was no exception.

Starting at the top row, moving left to right, are Kakai, a hull-less seed pumpkin I’m trying for the first time this year with pepitas in mind and Winter Luxury Pie Pumpkin, a creamy, smooth-fleshed pumpkin, just as its name suggests.  In the next row down are Eastern Rise, a new orange variety I’m trying this year described in the Fedco catalog as “a superb storage squash that comes into full flavor after December”; Nutty Delica, a Japanese Kabocha also new to me this year and according to Fedco “after storage this one may be the best of all the Japanese Kabochas. Complex flavor of its deep golden flesh improves with age, peaking after January;” and Uncle David’s Dakota Dessert, a buttercup variety I’ve enjoyed for the past several years. Across the bottom are two Delicatas, Honeyboat and Zeppelin, Burgess Buttercup and Potimarron, all old favorites for their flavor and storage qualities.

These gorgeous winter squash always seem like a generous fall gift because I’ve put so little effort into growing them.  I start the seeds in pots in late April and set them out in the garden two weeks later.  In mid-June I mulch them and then they are on their own for the next three months until harvest.  They grow and grow, taking over and filling in all the space around them.  Regular watering is all they get. 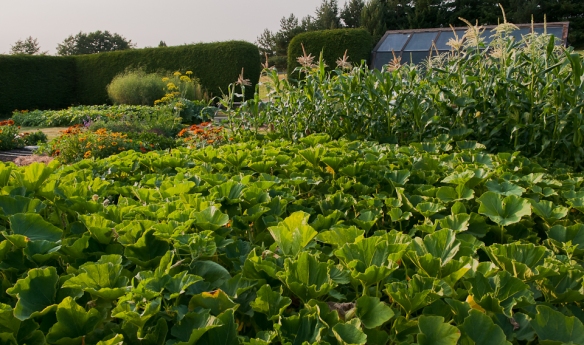 And even after harvest, winter squash make few demands and soon provide delicious meals.  I cure them for a couple of weeks in a warm place and then store them in the same cool shed that holds the potatoes.  By Thanksgiving, their starches have begun to convert to sugar and some, like Burgess Buttercup and Delicata, are ready to eat while others will be ready in December, January or later.  Throughout the winter and into early spring, we enjoy them baked, roasted, mashed, alone or mixed with other vegetables, in tarts and pies, in soups and breads.  With their complex, rich sweetness and bright orange color, they are a perfect vegetable to carry us through the winter dark.