This year’s seed orders have all arrived, the results of catalog study and online ordering that satisfy my gardening desires every January.  Before I opened the many seed catalogs that piled up on my desk at the turn of the year, I inventoried my seeds from the previous year, decided what long-time favorites needed reordering and thought about the new additions to last year’s kitchen garden that did well and those that didn’t.  I could have simply reordered the favorites and successes and been done, but catalog descriptions of superior flavor, greater hardiness or a rare heirloom variety always tempt me and each year I order lots of new varieties, just to try.  Sometimes I discover gems, other times duds but even one gem makes the experiments worthwhile. 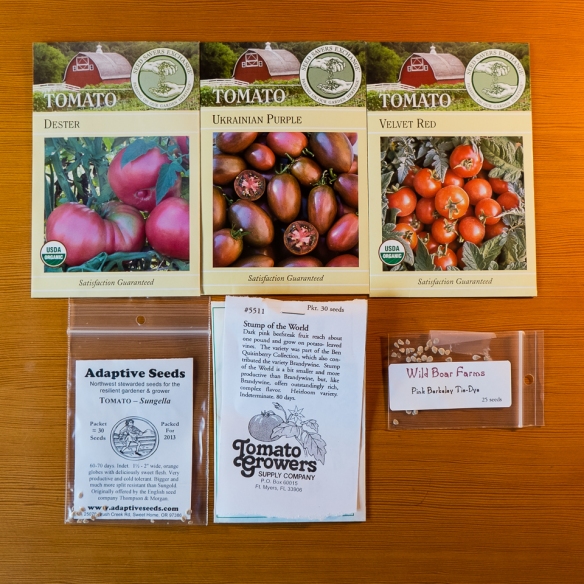 I was tempted by a lot of new tomato varieties this year and the pile of packets makes me wonder how I’ll find space for them next to all my old favorites.  From Seed Savers Exchange, there’s Dester, a “luscious pink beefsteak,” winner of SSE’s 2011 Tomato Tasting; Ukrainian Purple (aka Purple Russian), a purple-tinged plum shaped tomato that I’m hoping will be as flavorful as Pruden’s Purple and Cherokee Purple, two of my favorites in the purple realm; and Velvet Red, a one-inch cherry tomato with “striking silvery gray dusty miller-type foliage and excellent flavor” that’s this year’s entry in my search for the perfect red cherry tomato.  Last year’s Gardener’s Delight was a disappointment.  From Adaptive Seeds there’s Sungella, “1 ½ -2” orange globes with deliciously sweet flesh, bigger and more split resistant than Sungold.” What could be better than a bigger Sungold?  From my friend Carol who ordered from Tomato Growers Supply, there’s Stump of the World.  How could I resist that name and its comparison to my old standard Brandywine?  It’s a dark pink beefsteak, “a bit smaller and more productive than Brandywine but, like Brandywine, offers outstandingly rich, complex flavor.” And finally my sister Sarah and I ordered another delightfully named tomato, Pink Berkeley Tie-Dye, “a port wine colored beefsteak with metallic green stripes,” from Wild Boar Farms.  The name and the claim that 10 out of 10 people preferred its “sweet, rich, dark tomato flavor” to Cherokee Purple, our favorite tomato, made it one we had to try.

I was more restrained with peppers and eggplant, ordering only two new varieties of each.  Looking for a yellow horn-shaped pepper to go with Johnny’s wonderful red bull’s horn Carmen, I ordered Golden Treasure, an Italian heirloom from Seed Saver’s Exchange, nine-inch peppers that “ripen from green to shiny yellow,” “excellent for frying, roasting and fresh eating,” and Superette Sweet Banana Pepper from Fedco, similar to Golden Treasure so I’ll have to do a taste-off.  Wanting to try some mini-eggplant, I ordered two from Johnny’s, Hansel, a 3-4 inch dark purple eggplant “non-bitter and perfect for grilling or slicing thin on pizza” and Fairy Tale, a purple and white mini-eggplant with “wonderful flavor, no bitterness and very few seeds.” 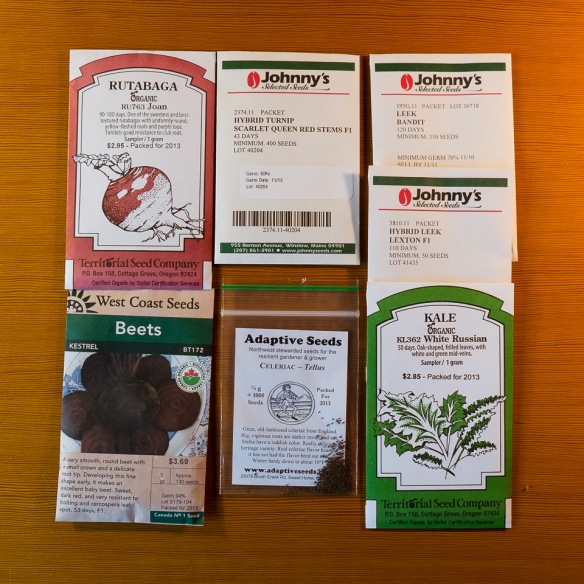 For roots, I ordered new varieties of celeriac, rutabaga and turnip and returned to an old beet favorite.  From Adaptive Seeds, there’s Tellus, “a great old-fashioned celeriac from England, darker inside and out with reddish stalks.”  The packet claims it has “real celeriac flavor because it has not had the flavor bred out of it.”  From Territorial there’s Joan rutabaga. I’m hoping it will be sweeter and more complex-flavored than Laurentian, a variety I tried last year and probably won’t grow again.  From Johnny’s there’s a new red salad turnip, Scarlet Queen Red Stems.  A red turnip I tried last year, Red Round turnip from Fedco, was disappointingly tough and thick-skinned.  I hoping Scarlet Queen will live up to its description: “sweet, crisp, white flesh with spicy, red skin.”  Finally, I was happy to find Kestrel beet at West Coast Seeds, a sweet, dark red beet Territorial used to carry but dropped several years ago.

For other winter vegetables, I ordered White Russian Kale from Territorial. Bred by Frank Morton, it’s “a sister variety of Winter Red.”  Even if the flavor isn’t noticeably different from Winter Red it will still be a pretty color contrast in salads.  From Johnny’s I ordered two new leeks, Bandit and Lexton with the hope of finding a leek that will stand up to leek rust. 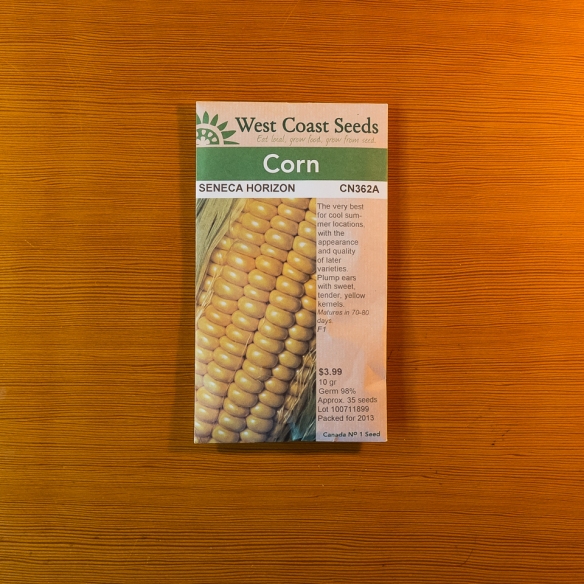 Finally, from West Coast Seeds I ordered Seneca Horizon sweet corn, dropped several years ago by Territorial but still my favorite corn.  I’m happy to return to after disappointing seasons with Golden Bantam and Spring Treat.

I’ve already started seeds of fennel, radicchio, broccoli and cauliflower in cell packs; they are up and starting to grow.  In the next day or two, I’ll plant flats of onions, shallots and sugar snap peas.  I’ll also plant small pots of tomatoes and in a couple of weeks, small pots of the other heat lovers, peppers and eggplant.  In late March I’ll start seeds of celery root.  And when the weather settles, I’ll leave the seed trays and potting soil for the big garden and start planting there. Seed packets ready, my new planting year begins.