One of the distinguishing features of our kitchen garden is the eleven-foot tall Leyland Cypress hedge that surrounds it on three sides.  We planted the hedge in 1994 as a windbreak for the new 120 by 110 foot garden, setting out gallon pot sized trees four feet on center.  In its nearly twenty years, the hedge has tempered the prevailing winds, as we’d hoped, but it has also grown to define the garden space, setting it apart from the surrounding fields and enclosing fruit trees and vegetable beds in a green-walled room.  It’s created a wonderfully private, protected space.

But of course there is a catch. Leyland cypress grows vigorously up and out; there’s a forest lurking in this hedge.  To tame it, we trim it once a year.  About this time every spring Scott tunes up his electric trimmer, a Black & Decker 24” hedge trimmer, strings out power cords and brings in a ladder for reaching the top of the hedge.  As he shears along the inside walls and up onto the top, I spread out tarps to collect the trimmings as they fall then load them in a cart and move them to a compost pile.  When the inside and top are done we move to the outside walls, repeating the shearing and the trimming collection. 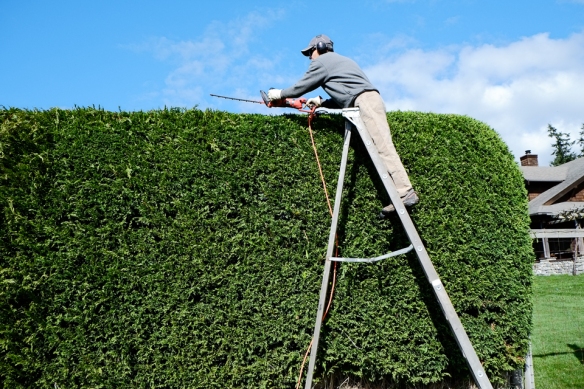 Once we get started, what seems like a big chore isn’t so bad, and in three or four afternoons we’re done.  Sunny days with no wind are the most pleasant for this task.  Cloudy days with breezes are more common.  In either weather, it’s a great excuse to be outside early in the season, transforming the kitchen garden’s shaggy winter walls into velvety green spring surfaces.