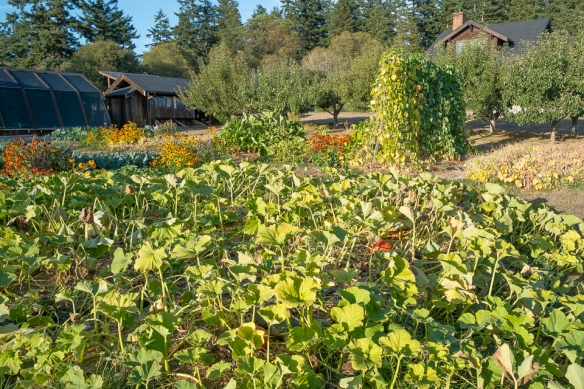 It’s been a very hot summer here in the Pacific Northwest with many days over 80 degrees, and our kitchen garden has offered lots of indicators of this unusual weather pattern. There have been a lot of “firsts.”

I just double-checked my harvest notes to confirm that I really did pick a Cherokee Purple tomato on June 27 and a Brandywine a few days later. It’s usually mid-July before we’re eating tomato sandwiches for lunch. Peppers usually turn red in mid-August but this year I started harvesting sweet, red Carmen the third week of July. Green beans and eggplant were early too, so early that the carrots and beets that usually fill the weeks before and after July 4th got passed over for these summer treats.

Corn thrives in heat and we were looking forward an amazingly early August harvest of a crop we usually harvest in September. So apparently were the raccoons. For the first time in the twenty-two years that I’ve grown corn here raccoons demolished my crop, first the sweet corn and then a week or so later the flint corn. Was it the heat that produced a crop that especially tempted the raccoons or had their usual food sources dried out? Whatever the reason, next year whether it’s hot again or cool I will follow my friends Debbie and Maxine’s plan and get a special raccoon fence.

Storage crops like shallots and onions, dried beans and winter squash can be a challenge to harvest before autumn rains in cooler years. Not a problem this year! For the first time ever the onion stalks toppled over without my help and the onions cured in the field. Usually mid-August onions still have green stems and I end up pulling onions and bringing them into the green house to cure. This morning I just took onions from the field to the storage room.

Dry beans like Black urtle beans and white Drabo usually dry on the vine but not until mid-to-late September when I’m anxiously watching for rain that could cause the crop to mildew. This year they are dry on the vine now. I’ve just harvested Drabo and will harvest Black Turtle soon.  Who knows, I may even find time to shell them before winter.

Beautiful orange, green and dusty blue winter squash are emerging through the dying vines in the squash beds, early like all the other storage crops. As my friend Diane said the other day, maybe the squash will actually cure in the field this year. In years past, I’ve brought them inside to a warm place for a few weeks to cure before putting them in cool storage. Maybe this year, like the onions, they will go right from garden to storage.

All these harvest firsts are exciting but also alarming. Are my early harvest dates a kitchen garden indicator of the global warming I know is happening? Will this summer’s temperatures become the “new normal”? It will be next garden year before I know what these firsts mean but I’m hoping this year is just a novelty.