Thanksgiving dinner is a wonderful meal for sharing winter vegetables from the kitchen garden. The challenge is to figure out how to serve the greatest number of these tasty roots and greens without overwhelming the guests or the turkey.

This year, in an effort to combine lots of root vegetables into one earthy, colorful dish, I’m planning to cut rutabaga, turnip, carrots, parsnips, beets and celery root into bite sized pieces, roast them at about 400 degrees until they are soft, then toss the still-warm roots with an apple cider vinaigrette and serve this dish at room temperature as a salad. I may even arrange the roasted roots on a bed of radicchio or arugula so I can include these favorite hardy greens in the mix. Thanks to my friend Nancy for the inspiration for this salad.

Brussels sprouts are another favorite winter vegetable and Thanksgiving classic that many but not all guests like. A little camouflage goes a long way to creating converts. Rather than simply steaming whole sprouts, I sometimes slice them thinly and sauté them quickly in butter. Or I will halve or quarter them, toss them in olive oil and roast them at 450 degrees until they begin to crisp, usually in five minutes or so. Either way their appearance is unfamiliar enough that people try a few and then try more.

Mashed potatoes are the perfect vehicle for gravy and an essential part of Thanksgiving dinner but winter squash also mashes beautifully and holds gravy just as well as mashed potatoes do. Instead of serving one bowl of potatoes and one of squash, I’m considering a single bowl of Alice Waters’ Delicata Squash, Potato and Celery Root Puree from Chez Panisse Vegetables (1996), not two but three vegetables in one dish. It’s deliciously rich on its own and gravy would only make it better. Mashed potato purists might resist until they try it, but just to be safe, I may serve a separate bowl of mashed potatoes.

Finally, winter salads are sometimes on my Thanksgiving menu and when they are they often feature our apples or pears mixed with hardy greens, kale, mache, arugula or radicchios, and maybe toasted nuts or even crunchy bits of raw celery root. This year, I have a lovely crop of flavorful, dark green mache thanks to seeds saved and shared by my friend Heike. I could make a simple mache salad with sherry vinegar vinaigrette, but if I decide my roasted roots dish fills the salad slot, I might skip the greens and serve a platter of roasted pears. Their caramelized sweetness would mix well all the other dishes and provide a sweet complement to tart cranberry sauce.

So many vegetables, so many choices: I’ll decide by Thursday morning. And I’ll post photos of the finished dishes then. 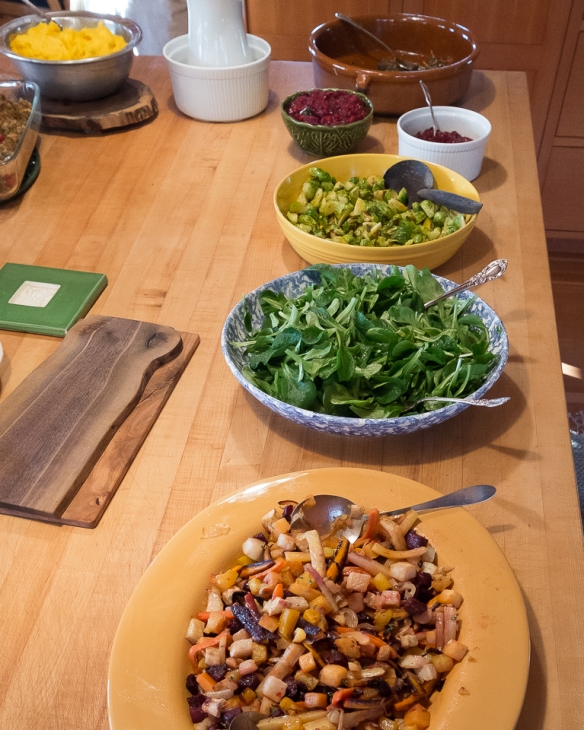 Combine all ingredients in a glass jar with a tight-fitting lid. Cover with lid and shake well. Makes 1 ¼ cups

Store vinaigrette, covered, in the fridge. Let stand 10 minutes or until room temperature. Shake well and check seasoning before using.