This year I planted January King cabbage, an heirloom cabbage that Adaptive Seeds claims: “overwintered under row cover & a good covering of snow, & survived our 5 ̊F lows in December 2013.” I remember ordering seeds during a particularly cold spell last year and looking for vegetables that would survive whatever the next year’s winter would bring. January King was an excellent choice. So far this winter, our nighttime temperatures have reached the mid 20s, and January King is thriving. I hope I don’t have to test it or any of our other winter vegetables at even lower temperatures!

It’s a beautiful cabbage, soft green outer leaves tinged with purple. By the middle of our unusually warm fall, plants seeded indoors in early June and set out in mid-July had filled out into gorgeous rosettes and gained more comments for their beauty than any other vegetable in the winter garden. Then with our coldest nights, they took on a frosty beauty that clearly justified their name. Now their leaves are darker green with even stronger purple. 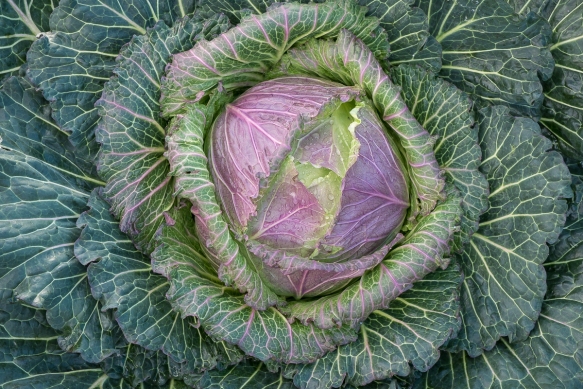 I grow just a few cabbages each year, sometimes a red like Ruby Perfection or a smooth green like Gonzales and often a crinkly-leaved Savoy like Melissa or Alcosa. Savoy is my favorite for both its tender texture and mild, sweet flavor, so it was a bonus that cold-tolerant January King is also a Savoy-type. Its leaves are not so crinkly as other Savoys but are very sweet and tender, especially after several strong frosts.

The reason I grow only a few cabbages is that a four or five pound cabbage can last a long time when there are just two people to eat it. Its cousins Brussels sprouts, kale and collards which we can harvest in smaller amounts seem much more manageable for two, but cabbage is just enough different from the other crucifers that it adds another taste to winter meals. For that reason it’s worth growing. 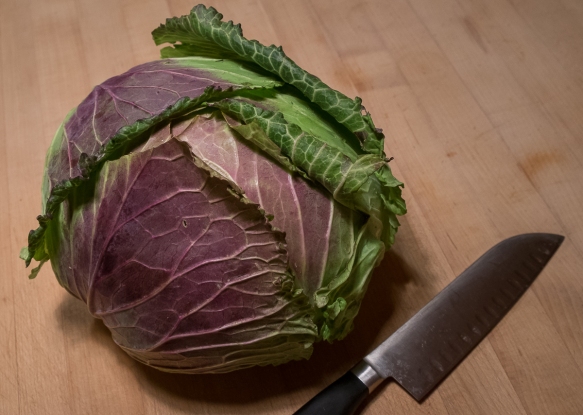 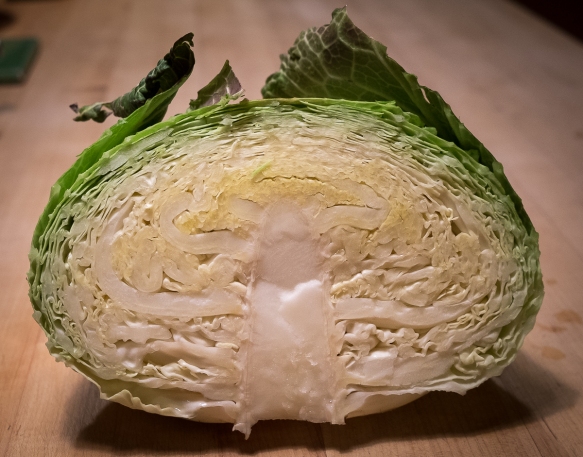 And in the past few weeks I’ve been experimenting with a recipe that makes me glad I have lots of cabbage. In the December 2015 Food and Wine magazine, chef Carla Hall shares a recipe for Sautéed Collards and Cabbage with Gremolata. I followed her instructions exactly the first time with delicious results. I quickly sautéed the thinly sliced collards and cabbage with a little olive oil, shallots and garlic until “wilted and crisp-tender,” added a little crushed red pepper and lemon juice and then served it with a few spoonfuls of the gremolata, a mixture of finely chopped parsley, minced garlic, lemon zest and juice and olive oil, seasoned with salt and pepper. The sweet, lightly browned cabbage and sweeter collards combined wonderfully with the mixture of sharp lemon, herby parsley and pungent garlic. 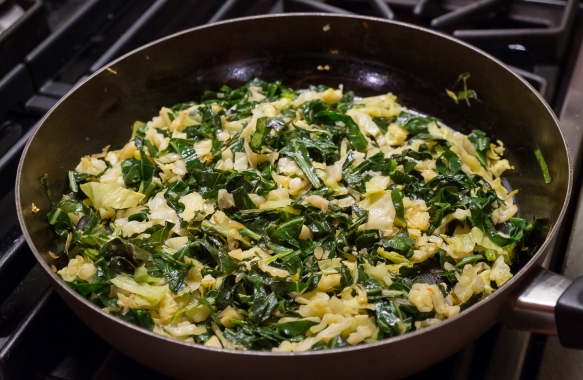 In later iterations, I’ve substituted kale for collards, then radicchio for collards and once used apples instead of another green. All were delicious with or without the gremolata. And we went through an entire five-pound cabbage with all these variations on this great technique.

There are lots of other cabbage recipes I’ll be making in the next winter weeks. Old favorites are cabbage risotto, a rich and creamy blend of rice, dissolving cabbage and melting cheese, and cabbage with buckwheat pasta and fontina cheese, a satisfying combination of earthy textures and flavors known as Pizzoccheri in Italy. And of course there is slaw and its many variations. With all these possibilities, two people and a cabbage don’t sound so daunting after all.

Sautéed Collards and Cabbage with Gremolata

In a large pot, heat 2 tablespoons of the olive oil. Add the shallots and sliced garlic and cook over moderate heat, stirring occasionally, until light golden, about 5 minutes. Add the green cabbage, collard greens and the remaining  2 tablespoons of olive oil and season with salt and black pepper. Cook over moderately high heat, stirring, until the collards and cabbage are wilted and crisp-tender, 7 to 8 minutes. Stir in the crushed red pepper and the remaining 1 tablespoon of lemon juice. Transfer the greens to a platter, top with the gremolata and serve.

The gremolata can be made up to 3 hours ahead and kept covered at room temperature.