Just after the New Year my friend Diane asked me if I’d finished my seed orders yet.   I laughed and said I hadn’t even begun. The fun of the holiday weeks had filled up any garden planning time.

But I knew I needed to get started and that the first step, before I’d let myself open even one of the 2016 catalogs piling up on my desk, was to organize and inventory my seeds. After arranging the seed packets alphabetically in shallow cardboard boxes, I peered into each packet and jotted down what I had enough of for another year and what I’d run out of and needed to replace. This bit of organization always gives me the illusion that all I need to do next is order the seeds I’ve run out of and I’ll be done. It should be that quick and easy, but it rarely is. 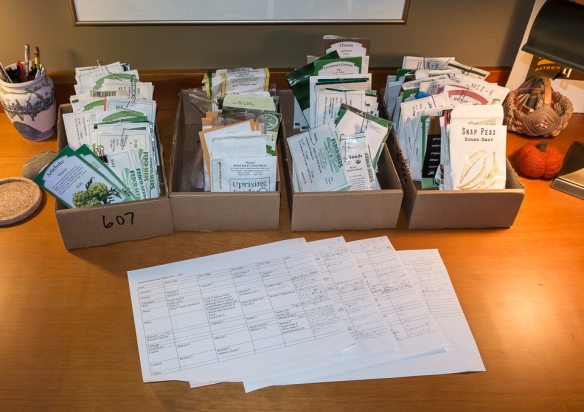 In addition to noting what I needed to replace,  I found myself jotting down phrases like “a new red beet,” “another broccoli,” “a yellow carrot this year and a better red carrot,” “a new sweet corn” “a bolt-resistant variety of fennel,” “a new red pepper,” “a new orange or yellow tomato.” It’s not that I’d run out of these seeds, but it was time for some change. And seed catalogs with their enticing descriptions and photographs offered lots of possibilities for change, maybe too many possibilities. At least the list of changes wasn’t too long.

On first reading, every variety looks great and it’s lovely imagining all of them growing in my kitchen garden, but knowing I should choose only one or maybe two or at most three varieties I reread the descriptions paying attention to the details wrapped in the tempting prose. Flavor and texture, appearance and color, size, days to maturity/harvest, heirloom, open-pollinated or hybrid, germination needs, disease resistance, cold or heat tolerance, preparation or serving suggestions all vie for attention.

I started with beets, narrowing down Territorial Seed Company’s sixteen offerings to five candidates—Boro, Merlin, Cylindra, Lutz and Avalanche—and comparing them to beet descriptions in Fedco, Johnny’s, Pinetree and Adaptive. Boro has a slight edge over Merlin because I’m worried that Merlin, touted in Johnny’s for its sweetness, might be too sweet, and Boro’s “sumptuous, thick leaves” remind me of how much I like beet greens. Then there’s Cylindra, an heirloom with “bold, earthy flavor” and unusual shape that might be fun to try though Johnny’s catalog description notes that: “roots tend to push up out of the ground as they grow” and that for smoother shoulders hilling is a good idea. Would I get around to that? I’ve grown Lutz before for its winter-keeping qualities and liked it. Maybe it’s time to grow it again. And then, just to slow down the decision making process a bit more, there’s a white beet, AAS winner Avalanche, something completely new. I grow golden beets now, and white might be a nice addition to create a color trio. After nearly half an hour, I was ready to move on to broccoli.

So this is why it takes so long to complete seed orders. But it’s such a pleasant way to spend some January days. After several afternoons working through my list and through all my catalogs, I finally made my orders. And it’s still only mid-January.

The new entries are: Boro, Lutz and Avalanche for beets, a sprouting broccoli called Summer Purple, Yellowstone and Atomic Red carrots, Honey Select sweet corn, Preludio fennel and Mantovano fennel, Lipstick red pepper, and for orange tomatoes, two heirlooms, Persimmon and Valencia. These new varieties will arrive with all the other seeds that I ordered. The new garden year has begun.