The classic French pommes Anna recipe calls for layering thinly sliced potatoes with clarified butter and baking them to create a cake. As Julia Child writes in Mastering the Art of French Cooking, Volume Two (1970): “Pommes Anna looks like a brown cake 6 to 8 inches in diameter and 2 inches high, and it smells marvelously of potatoes and butter. That, in effect, is all it is: thinly sliced potatoes packed in layers in a heavy pan, bathed in clarified butter, and baked in a very hot oven so that the outside crusts enough for the potatoes to be unmolded without collapsing. The contrast of crusty exterior and tender, buttery interior is quite unlike anything else in potato cookery, and to many pommes Anna is the supreme potato recipe of all time.”

Pommes Anna is truly delicious but so, I’m finding, are Annas made from other root vegetables. Turnips, rutabaga, beets, celery root, carrots all undergo the same transformation when thinly sliced, layered with butter or olive oil in a glass or metal pie plate or heavy skillet, and baked in a hot oven.

The first non-potato Anna I tried was Turnips Anna from an October 2014 Sunset Magazine recipe. A friend had made it for a party that fall and I finally got around to making one this winter. In addition to layers of turnip, bits of crispy bacon, a little grated cheddar cheese and fresh thyme join the melted butter in the layers between the thinly sliced turnips. 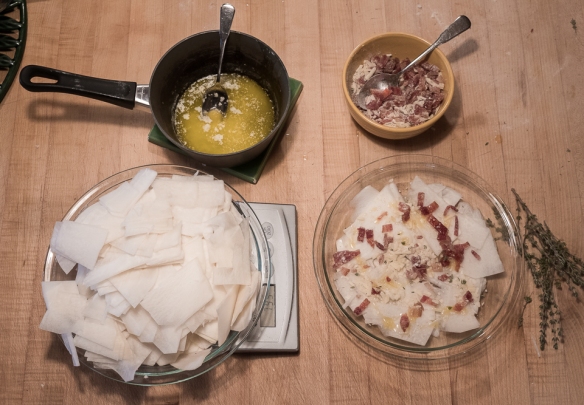 The result was everything Julia Child promised for pommes Anna, crispy exterior, creamy interior, but this time the fragrance was of sweet turnip and butter with a hint of smoky bacon and herby thyme. 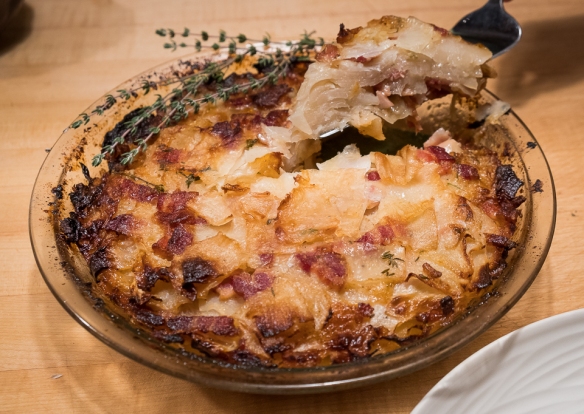 I’ve made it several times since and want to try it next with Joan rutabaga instead Gilfeather turnip. I think the flavor will be very similar but perhaps a bit earthier and the color more golden from the yellow-toned rutabaga.

Intrigued by this Anna technique, I’ve searched the Internet for other root vegetable Annas and found many variations both in vegetables used and in baking strategies. One recipe from Food 52 is titled Rustic Rainbow Root Vegetables with Rosemary (or, more simply put, Root Vegetables Anna) and begins with the observation that “you can basically do whatever you want with this one,” both in the roots you choose and the technique you follow. I’m learning that flexibility is one of the pleasures of root vegetable Annas. For my rainbow of root vegetables, I used celery root, White Satin carrots, Yellowstone carrots, Red Core Chantenay carrots and red beets, slicing each on a mandoline then layering them in a heavy skillet with olive oil, salt and pepper, grated Parmesan cheese and rosemary.

The resulting Anna was fragrant with the sweet smells of carrots and beets. The celery root wasn’t so dominant as the other roots, but it offered a subtle sweetness and softer texture and I’d definitely include it in future recipes. And the finished dish was beautiful.

Other variations I’m looking forward to trying are from Bon Appetit using potatoes, celery root and turnip, butter and rosemary and from Martha Stewart using rutabaga and potato, butter and thyme. Finally, the New York Times recently republished a recipe for Sweet Potatoes Anna With Prunes from The Food 52 Cookbook. I don’t grow sweet potatoes but I’m wondering if winter squash would be a good substitute.

Just as there is a lot of variation among the root vegetables, oils, herbs and cheeses, each recipe also gives slightly different suggestions for how to slice the vegetables, what pan to cook them in, whether to use the oven, the stove top, or some combination of the two, how to bond the layers of vegetables and finally how to present the finished Anna.

I’ve most often used a mandoline to slice the vegetables and really like the very thin, even slices it allows (3.5 mm or about 1/8 inch), 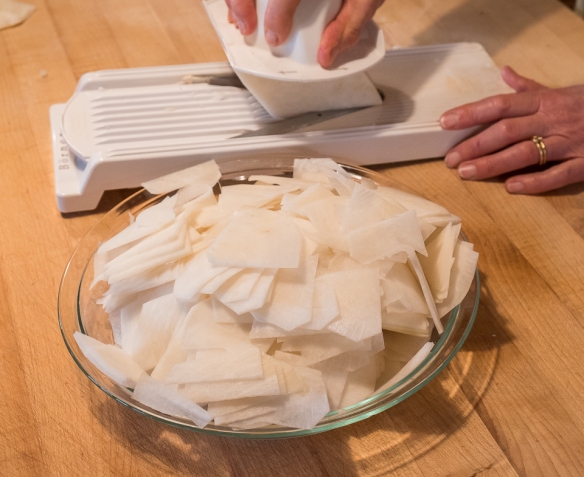 but I’ve also used a sharp knife and gotten good, thin slices, not so thin as a mandoline produces but still fine for the final dish. I used Pyrex pie dishes for the first Turnip Anna because I didn’t have metal pie pans, but I’ve made it again in a heavy aluminum frying pan and I agree that metal produces a crispier crust. Both Julia Child in her pommes Anna instructions and the Food 52 Rainbow Anna recommend using a heavy skillet and starting the Anna on the stovetop to begin the browning immediately and then transferring the Anna to the hot oven to finish cooking. This method has produced a crispier bottom crust for me.

Another step most recipes include is pressing or weighting down the layers so that they fuse into a cake. The Food 52 Rustic Rainbow recipe suggests simply pressing down on the layers while the skillet is on the stove top “to make sure the layers are bonding together.” Sunset’s Turnips Anna recipe recommends setting another pie pan on top of the Anna and weighting it with dried beans or pie weights. I’ve done both and find the added weight helps bond the layers. Several of the recipes also suggest placing a rimmed baking sheet underneath the pie pan or skillet to catch bubbling butter. In her pommes Anna recipe, Julia Child gets graphic with this warning advising: “Set drip pan under the potatoes, on rack below, to catch bubblings-up of butter (which could otherwise set fire to your oven).” No fires yet in my oven!

And for the final presentation, turning the Anna out onto a platter shows off the crispy bottom layer as well as any pretty design of vegetables I might have managed to arrange on the bottom layer, but serving directly from the pan works fine too. The important thing is to enjoy the amazing fragrance and flavors and, of course, to have fun making these root vegetable variations on the classic French pommes Anna.

Author Notes: Not to lead you astray in the introduction to this recipe, but you can basically do whatever you want with this one. It’s delicious. And you can make it as simple, or as complex as you see fit. Don’t own a mandoline? No problem. Just slice the vegetables thinly, and perhaps extend the cooking time a bit. Don’t want to go through the acrobatics of flipping a giant hot oily root vegetable pancake? No big deal. Throw it in a gratin dish, seriously consider adding more cheese and some cream, and then bake it for about an hour. If you are feeling really ambitious, whip a little goat cheese with some cream and serve as a sauce on the side.

Serves 6 as a side

Take the vegetables out of the oven and let cool in the skillet for about ten minutes. Gently using spatula, slide pancake onto plate. Cool for another five minutes. Slice into wedges and serve.