Snow Crown has been my go-to cauliflower for the past several years because it’s been so easy to grow for spring and fall harvests. Next year, though, I’m adding Purple of Sicily to my cauliflower-planting schedule.

My friend Carol gave me some starts of this heirloom cauliflower in mid July and now, at the end of October, I’ve just harvested the first few heads.  It’s my new favorite cauliflower.  Not only is Purple of Sicily beautiful, it’s more delicately flavored and tender than Snow Crown.  And, based on this first try, it might even be easier to grow than Snow Crown.

Territorial Seed Company carries seed for Purple of Sicily and provides this description:

90 days. Heirloom quality, exceptional flavor, super nutrition, insect resistance and astounding color all in one cauliflower. It’s no wonder Purple of Sicily has been handed down from generation to generation. Big 2-3 pound heads are brilliant purple in the garden or on the fresh veggie platter, changing to a striking green when cooked. The curds are loaded with minerals and have a sweet, delicious, refined flavor. Its natural insect resistance means healthier plants and better success in the garden.

As predicted, the purple outer layer of the cauliflower head turns rich green when cooked. 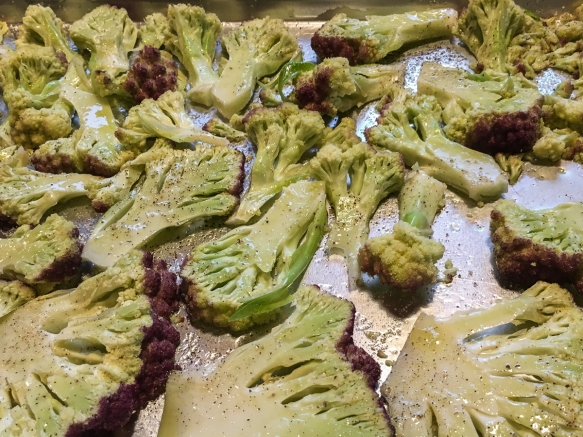 Purple of Sicily also cooked more quickly than Snow Crown. Roasted at 375 in olive oil, salt and pepper, it was softening in twenty minutes rather than the usual forty. I also tasted the raw florets as I was preparing Purple of Sicily for roasting and found them more tender and sweeter than white cauliflower, which can taste chalky when raw.  I may end of serving more raw cauliflower in the future.

Further research into Purple of Sicily suggested that not just the cauliflower head but also the leaves and stems are edible.  It’s true!  The first time I cooked Purple of Sicily, I saved out a pile of leaves as I sliced the head for roasting. 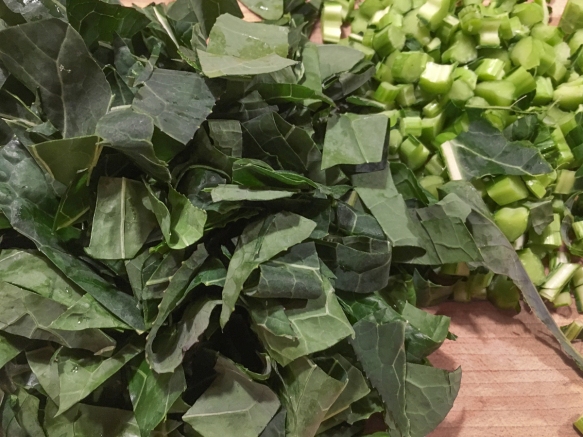 As predicted, the leaves and stems are delicious sautéed. They taste like collards but cook more quickly.

For our first Purple of Sicily cauliflower dinner, I added strips of roasted sweet peppers and sautéed shallots to the sautéed cauliflower leaves and stems and arranged them on a plate with red quinoa and fans of roasted, now green, cauliflower, then garnished all with toasted hazelnuts and yellow raisins.  It was a delicious Purple of Sicily meal with more to come, both this fall and next spring.