It’s been a very busy April and May, but the spring and summer vegetables are finally in the ground and growing. I’m ready to take a break from planting the kitchen garden, but not before I finish one more task. It seems odd to be doing this during these sweet days of late spring and early summer, but it’s time to start seeds of fall and winter vegetables.  With days-to-maturity requirements of 100 to over 200 days, many of my winter favorites, like celery root, leeks, parsnips, Brussels sprouts, winter cabbage, overwintering cauliflowers and broccolis, need to be seeded now or in the next week or two so that they’ll be mature by the time days become shorter and temperatures drop.  At that point, they’ll be ready to hold in the garden, heavily mulched against cold and sometimes covered against the wind, for harvest throughout the winter.

I look at my list and translate the days into months and realize that a hundred days from now is mid-September, the autumn equinox. Time to start planting!

With the exception of parsnips, which I’ll plant outdoors soon, I’ll start all of these seeds indoors.  I’ve already seeded celery root and leeks and their small, green shoots are rising above the potting soil.  I used to start celery root indoors in late March and set out plants in mid-May, but in the past few years, I’ve found that the plants grow better when the weather is warmer, so I start them in early May, May 9th this year, and set them out in late June.  I also used to direct seed leeks in late May, but a few years ago, I experimented with starting seeds indoor in pots, where I got much better germination, and then setting out the contents of the pots in mid-to-late June where the leeks grew well into pencil-sized plants for final transplant into rows. 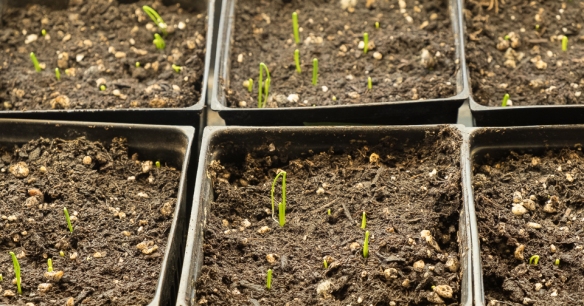 Next week, I’ll start the brassicas: Brussels sprouts, cabbage, cauliflower and broccoli. By mid-July, the brassicas will be sturdy plants in 4-inch pots, ready to harden off and set out in winter beds.

In mid-July, I’ll plant more winter crops, those with shorter days-to-maturity, like carrots, beets, turnips, rutabaga, kale.  But mid-July is six weeks away, and between now and then there will be time to take a break from planting the kitchen garden.