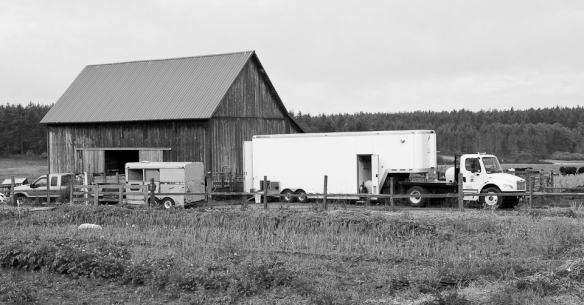 This fall is the tenth anniversary of the Island Grown Farmers Cooperative (IGFC) and the ninth year of USDA inspected meat processing with the IGFC’s Mobile Slaughter Unit (MSU) and its cut and wrap facility in Bow.  To celebrate this milestone and to thank the Lopez Community Land Trust (LCLT) and community members that have made it possible, the IGFC is hosting an open house on Saturday, September 11th at 4:00 at the Lopez Center for the Community and the Arts (LCCA).

As IGFC board members Bruce Dunlop and Barbara Thomas explained to me earlier this summer, the biggest reason for celebration is that the IGFC has accomplished what it set out to do: make raising livestock more profitable for local farmers and give consumers the opportunity to buy USDA inspected, locally grown meat by the piece at farm stands, farmers’ markets, and groceries.

Before the MSU, farmers with cattle, sheep, pigs or goats to sell took them to the livestock auction in Marysville and farmers who wanted USDA inspected meat had to take their animals as far south as Centralia.  Consumers who wanted to buy locally raised meat needed to find out who had inspected meat to sell by the piece or arrange a custom slaughter purchase of a quarter, half or whole animal and store it in their own freezer.

For both farmers and consumers, things have changed a lot since the IGFC’s custom-designed, first in North America Mobile Slaughter Unit began arriving at local farms. This summer, farmers on Orcas, Lopez, and San Juan took time out of their busy schedules to tell me about the difference the IGFC and MSU have made for their businesses.

Vern and Sidney Coffelt have been farming their 197-acre Coffelts’ Farm on Crow Valley Road, Orcas, since the late 1950s.  “We’ve always done sheep and we’ve maybe raised a beef for ourselves,” Sidney explained, “but the MSU has enabled us to expand the beef production and add more sheep and more pigs.”

The reason for expansion: “The MSU has made it possible to sell our meat at a reasonable margin. You can go to all the trouble to grass feed and to raise things in a good, responsible and humane way but if you have to take that animal and sell it at the auction nobody cares. They don’t give you any premium for that, but the public wants to know that the animal ate grass all its life.  They want to know that you didn’t give it any antibiotics.  They want to know what you didn’t do and what you did do and they are willing to pay a bit of a premium.”

Coffelts’ grass-fed meat is available at their farm stand and at the Orcas Farmers Market and is served in local restaurants.

Here on Lopez, Dawn Ritchie raises Suffolk sheep on Double R Bar Ranch, the 150-acre farm on Fisherman Bay Road that has been in the Ritchie family since 1965. “Because Marysville Livestock Auction is no longer operating, I use the mobile unit.  It’s really made my business; it works really well for everyone.  It’s great to sell to local people so they can enjoy local meat.”

Dawn sells her sheep by the head to Brian Kvistad at Blossom Organic Grocery.  “They go straight from the farm to the MSU; when they’re on the MSU they become Brian’s.  He has them cut to his specs and wrapped and sells a variety of cuts at Blossom. Often when I’m in Blossom, I will get compliments about how much people have enjoyed the lamb.”

On San Juan Island Jim Sesby and Christina Dahl-Sesby of Heritage Farm use the MSU for their pork and beef. “For me,” Jim said, “the MSU is especially good because we don’t have to take our animals off farm.  The trauma of taking animals off farm is really hard on the critters. Another aspect I really like about the MSU is that I’m assured that I will get my own meat back.  It doesn’t get tossed in with the others and you get back heaven only knows what.  Everybody involved with the MSU and the cut and wrap in Bow are so easy to get along with.  They are good people.”

Sesbys sell their meat at their farm stand. “I feel that the reason people buy my product is that they can actually come out to the farm and see the animals.  And the fact that you can sell your own product at retail is just phenomenal.  It makes it viable.”

Another San Juan Island farming family, Rex and Lisa Guard, said: “The big growers rattle off so much meat, but you don’t know what you’re getting.  Now the consumer is starting to notice.  They’ve seen what feedlots look like.  We’ve always eaten our own meat and that was great for us, but the community couldn’t get in on it.  With the IGFC they can.”

Other farmers had similar stories to tell. Stop by the LCCA on Saturday and meet the farmers, hear their stories, sample their product and celebrate the success of the IGFC.