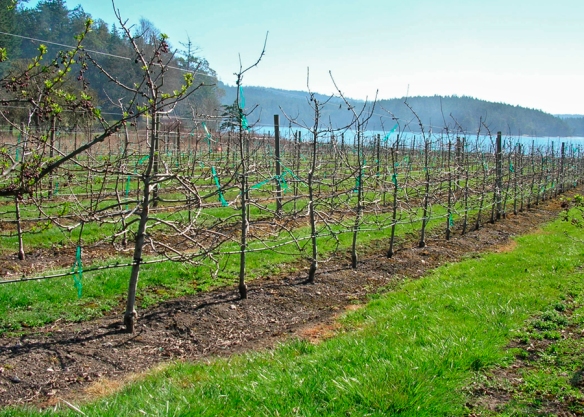 Why am I writing about cider in May? Because, as Rich Anderson of Westcott Bay Cider explained to me, “It’s a perfect summer drink.  It’s a little lighter than beer and has less alcohol than wine.”

And there’s another reason to drink Westcott Bay Cider: it’s made locally on San Juan Island.  Recently, Rich gave me a tour of his Westcott Bay orchard and cidery and described the art of cider making.

When he retired from Boeing in the mid-1990s, Rich replanted the old two-acre orchard on his Westcott Bay property with 1000 cider apple trees. Kingston Black, Yarlington Mill, Dabinett and Sweet Coppin are just a few of the sixteen varieties he selected. They’re in rows running west down toward the bay and trained in a spindle technique—one central leader with lateral branches—to keep the closely planted trees both productive and easy to pick. “I don’t want to deal with ladders at my age,” Rich said, laughing.

“You have wineries, so why not cideries?” Rich asked as we walked into the building where he makes his cider.  From a spigot near the bottom of one stainless steel fermentation tank, Rich drew us glasses of his driest cider.  It’s English-style cider: dry, light, and slightly effervescent.  I could drink a lot of this.

An engineer, Rich delights in showing the equipment he’s bought, modified or made to transform his apples from just-picked fruit into this traditional beverage.  There’s an apple scrubber—a shallow, horizontal tank that uses running water and brushes to clean the apples; a stainless steel crusher that he describes as an overgrown Cuisinart to chop the apples; and a press to squeeze juice from the crushed apples into a wheeled tub below.

In another small room, Rich showed me a device called a grundy tank that lightly carbonates the fermented and filtered juice.  He pointed out hoses that go from the tank to a bottling machine and explained that the process treats the juice very gently.  “Too much agitation can spoil cider.”

Finally, there’s an ingenious pasteurizer that holds eight plastic milk crates of bottled cider and floods them with 140 degree F. water and a last, much smaller device: a wooden labeler that gently rolls labels onto the finished bottle of cider.  “You can sit here all day and roll on labels.” Rich said, smiling.

“I’m old enough to know better, but growing the apples and making the cider is still fun.”  Pouring us another glass of cider, this one a bit sweeter, Rich said, “Cider making is a blender’s art.  At least that’s my take on it and traditionally that’s the take on it.  The reason is that there are very few apples that have the balance of tannins, sugar and acidity to make one cider from one apple.”

“The way I blend is I balance the acidity and the tannin out as I go along. I want the tannin because I want that mouth feel—only tannin will give you that.  And I want acidity.  If you don’t have acidity, you get an unstable cider—they call it flabby—it’s just sort of blah tasting.  The one thing I lack and I wish I had it is a spicier apple.  They are hard to come by.”

Last year, he had plenty of apples, “so I could really do what I thought worked best.  That’s why I think the 2007 is going to be a really great cider.”

Don’t miss your chance to try it: buy a bottle at Blossom.  And check out the website: http://www.westcottbaycider.com/