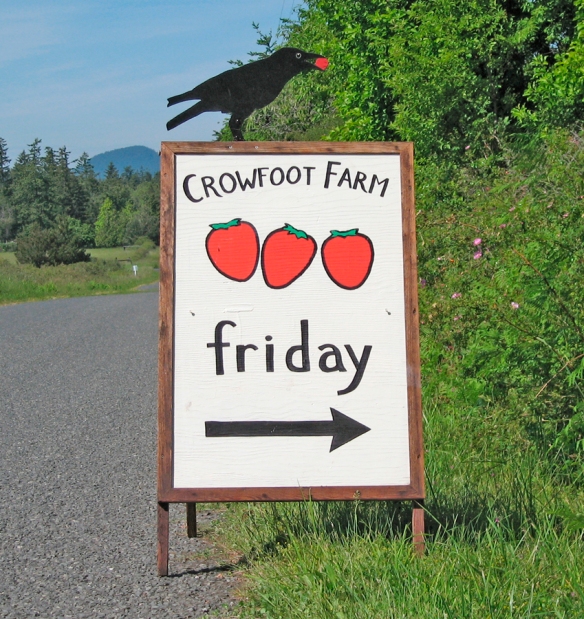 Did you know that there are only two certified organic strawberry farms in the greater Puget Sound that offer a pick-your-own option and Crowfoot Farm here on Lopez is one of them?  How lucky is that for those of us who refuse all but the fragrant, flavorful, fully ripe organically grown local strawberries—and want the savings of picking them ourselves!

I talked with Elf Fay and Eric Hall, owners of Crowfoot Farm, to learn more about why they raise strawberries organically and why they offer the pick-your-own option.  I also learned what and how many strawberry varieties they grow and when and where to pick or pick up these luscious, seasonal treats.

By raising strawberries organically, Elf and Eric explained, they provide berries free of pesticides, especially methyl bromide, a gas used in conventional strawberry farming.  Shaking his head, Eric explained that “methyl bromide eliminates everything: weeds, insects and fungus.”  Then he pointed to a passage in Harvard M.D. Andrew Weil’s book, The Healthy Kitchen, where Weil writes: “I do not eat conventional strawberries because they contain methyl bromide, a known cancer-causing pesticide, applied to the soil, taken up by the plant, and impossible to wash off the fruit.”

So, we’re doubly lucky here on Lopez: healthy berries at a good price.

However, these berries are more than healthy and affordable, they are delicious, and that’s because the main criterion Eric and Elf use when selecting varieties to plant is taste.  Their passion for taste even caught the attention of their plant supplier.

Laughing as they remembered the experience, Elf and Eric told me the story of their plant supplier—a large California operation that ships berry starts all over the U.S.—sending them misidentified varieties two years in a row.  “Finally,” Eric said, “the nursery sent two representatives to see what was going on.”  “After the representatives confirmed their mistake,” Eric continued, “I asked them why it was I, a small grower, who was noticing mislabeled plants.  They answered that it was because we had a specialty operation—growing berries for taste not for shipping!”

The varieties that met Elf and Eric’s taste criterion this year are Benton and Hood as their June berries and Tristar, a variety that produces largely in August.  Eric figured for a minute on a scrap of paper and then reported that they have nearly 13,000 plants, almost a mile and a half of rows.

That’s a lot of berries!  Pick them from June through Labor Day on Tuesdays and Fridays from 9:00 to 3:00 at the farm, 3759 Port Stanley Road.  It’s best to come early because they sometimes sell out before 3:00.  If you can’t pick your own, you can order flats Monday–Saturday to pick up at the farm, or you can buy them at Blossom where they’re delivered fresh daily, or eat them at Vita’s or Edenwild.

However you get them, enjoy the amazing taste of Crowfoot Farm strawberries and find a minute to thank Elf and Eric for what they give us each summer.