Tomatoes, peppers and eggplant are the highlights of my late summer garden and all are challenging to grow in our cool northwest climate. In the next several posts, I’ll write about how each grows in my garden, or more accurately in my greenhouse, and what I do with them in the kitchen.

I’m very fortunate to have a greenhouse for growing these heat-loving plants. My husband Scott designed the structure and we built it in 2000. It’s twenty-four feet long by ten feet wide and ten feet high at the peak. Inside are two twenty-four-by-three foot beds separated by a three-foot path. Before building the greenhouse, we built plastic houses each year, effective but fragile compared with this permanent structure. 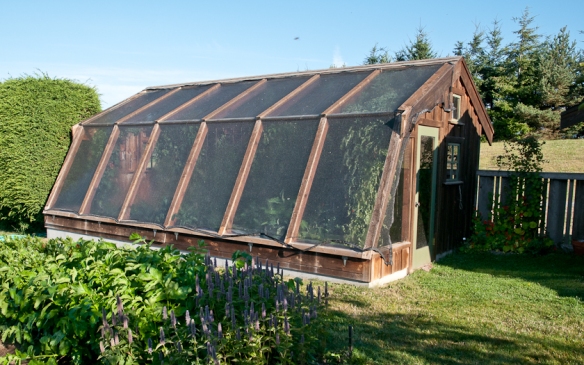 One great thing about the greenhouse is that it allows us to grow indeterminate varieties of tomatoes, those with vines that climb ten feet and higher.  Scott trains the vines along twine stretched down from the ceiling, limiting each plant to two main branches and regularly pinching off suckers.  The tomatoes form along the vines as the vines climb, resulting in a continuous supply of ripening tomatoes.  Planted eighteen inches apart, these climbing tomato plants form a solid ten-foot high wall of tomatoes by the end of summer. 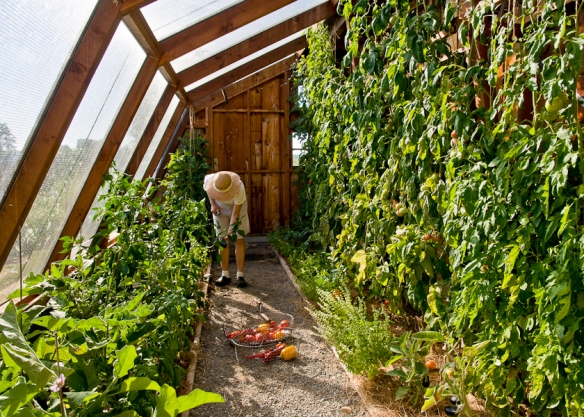 This year I planted Cherokee Purple, Brandywine, Pruden’s Purple, Momotaro, Golden Sunray, Kellogg’s Breakfast, Moonglow, Amish Paste, Speckled Roman, Peacevine and Sapho, starting the seeds under lights indoors in late February and transplanting them into the greenhouse in early April. We picked the first tomatoes in early August, a Cherokee Purple, a Brandywine and a Golden Sunray.  Compared to past years, this year’s tomatoes, even with the greenhouse, aren’t as abundant or robust or as early to ripen but they still provide the essential taste of summer. 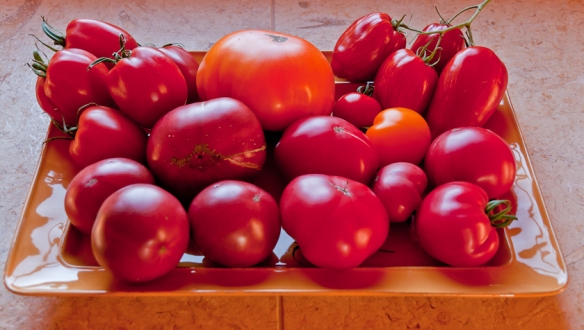 And what do we do with all these tomatoes?  Fresh tomato sandwiches for lunch all summer are a big reason we put the effort into growing tomatoes.  Cherokee Purple, Brandywine and Pruden’s Purple, all big, lumpy, red to purple hued heirlooms offering variations on the classic tomato acid sweetness are favorites for sandwiches.  Momotaro, developed in Japan, is also a sweet, red flavorful slicer. Here’s a Brandywine pair: 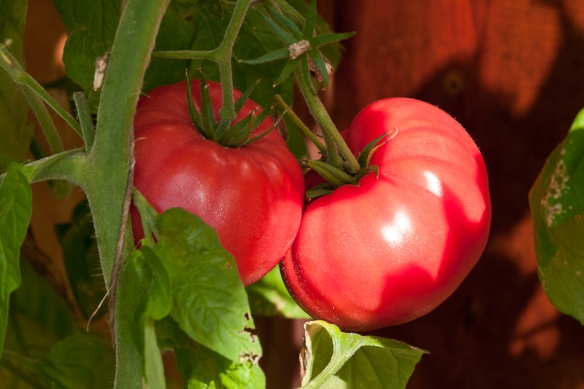 Golden Sunray, Kellogg’s Breakfast and Moonglow are all yellow to orange tomatoes, each with a unique sweet and spicy flavor.  For dinner most summer nights we have a side dish of red and yellow tomatoes, some combination of these seven favorites.  Occasionally I’ll quickly sauté some of these tomatoes into a sauce for pasta or cook them with peppers or eggplant, but most often we eat them fresh.  Here’s a Golden Sunray pair: 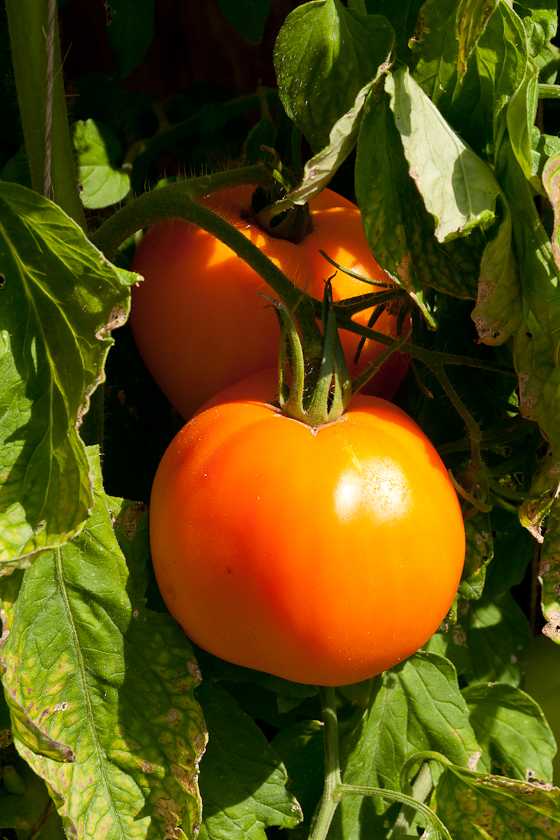 Amish Paste and Speckled Roman are dense-fleshed very flavorful tomatoes that I use primarily for drying, my favorite way to preserve tomatoes. Sliced about half-an-inch thick and spread on the trays of my food dehydrator, they are dry and ready to store in glass jars in about twelve hours.  The other seven tomatoes are juicier and take longer to dry but still make a flavorful dried tomato.  Instead of drying tomatoes, I sometimes roast them on low heat until the juices have evaporated and the tomatoes form a thick sauce that freezes well.  Here’s a Speckled Roman pair: 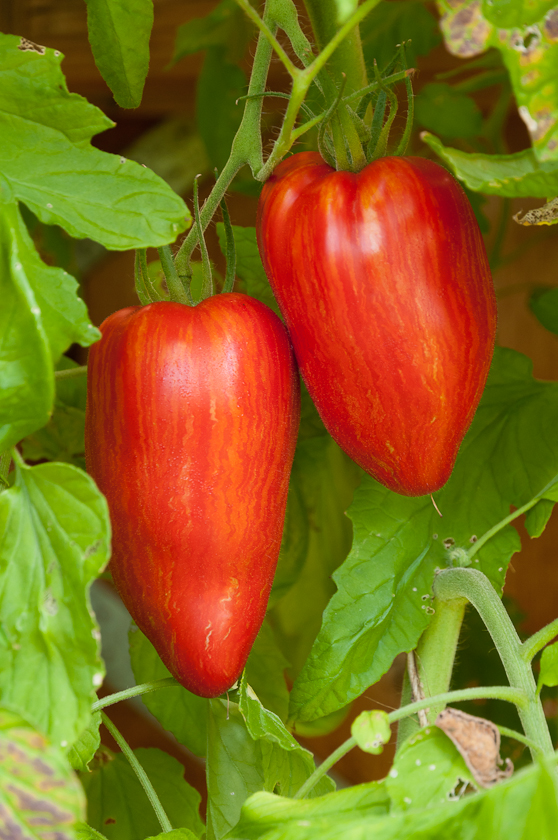 Finally, the Sapho and Peacevine are small tomatoes, Sapho about an inch and a half and Peacevine less than an inch.  I’m growing each for the first time this year on recommendations from friends. Peacevine is disappointing because the skins are tough and the flavor is bland but Sapho is great and I’d grow it again. Here’s a Sapho cluster: 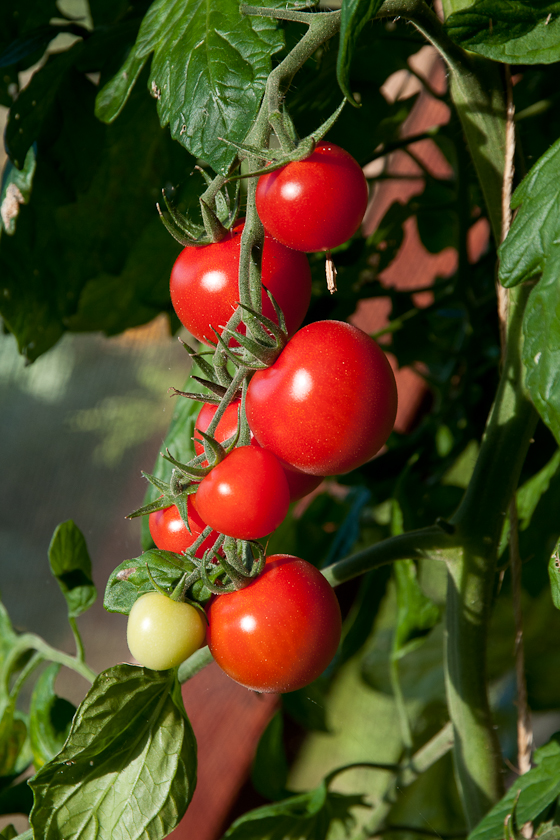 Here’s hoping for a warmer summer next year so that even without a greenhouse, tomatoes will ripen.