Vancouver Island garden writer Linda Gilkeson regularly emails “Linda’s List” to her many subscribers in the Maritime Northwest. Her most recent subject line, Bitter Cold Alert, definitely caught my attention and sent me to the kitchen garden to follow her advice: “Given how cold it could be, I suggest you harvest as much of the above ground crops (leeks, cabbage, kale, Br. sprouts, chard, etc.) as you can stuff in your refrigerator and cover everything you can’t harvest.”

Heading out into the cold and blustery but sunny late morning, I started with the leeks and quickly filled a wheelbarrow with the last 12-foot row of these special winter alliums, about six dozen leeks. Next I went to the Brussels sprouts and cut off at the base the fullest remaining stalks, six little trees of sprouts. Leaving these two crops to clean later, I turned to the chard, collards and kale, filling bags with the biggest leaves of each and packing them into the refrigerator. Then it was time to cover what remained. I piled extra mulch on the carrot and parsnip beds. I also piled extra mulch around the tall kale plants before moving hoop houses over them and over the chard, securing a small cloche over the mache and closing the cold frame over the mustard and arugula. Finally, I trimmed the leeks and popped the Brussels sprouts from their stalks, filled gallon bags with both, and found more room in the fridge. 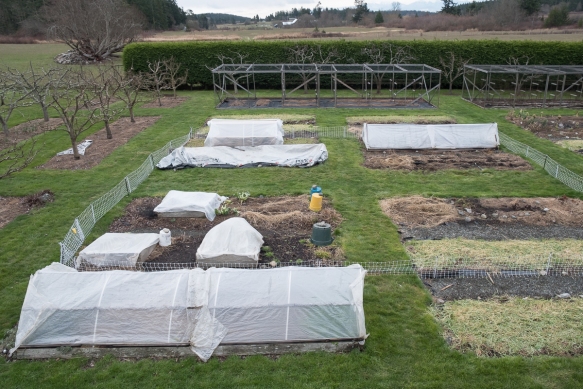 Happily, I was able to start using this emergency harvest right away. At a dinner party that night, I shared a platter of sautéed leeks and Brussels sprouts and at another dinner a few days later, I shared a platter of sautéed leeks, chard and Brussels sprouts. For the first, I sliced the leeks lengthwise and then crosswise into inch-long pieces, then sautéed them in a little butter. I sliced the Brussels sprouts into eighth-inch rounds and sautéed them quickly in butter as well. Finally, I added a little heavy cream to the final sautéing of both the leeks and the Brussels sprouts, not really necessary but very tasty.   The warm green and yellow tones of both vegetables looked lovely against a dark brown stoneware platter.

For the second dinner’s platter of leeks, chard and Brussels sprouts, I sautéed the leeks and Brussels sprouts in butter as before though I left out the cream. Then I braised the dark green chard in a bit of water until it was tender. On a shallow yellow rectangular platter, I arranged the vegetables in sections, leeks then chard then Brussels sprouts forming a winter vegetable harvest flag. I missed the opportunity to get photos of each of these dishes but they were as beautiful as they were delicious.

Still working my way through bags of leeks and kale, a few nights later I made a large dish of Boerenkool to serve at a birthday party we were hosting. This classic Dutch dish combines mashed potatoes, sautéed leeks and wilted kale into a wonderfully satisfying winter mash. With roasted carrots and a pork leg roast, it made a festive dinner. 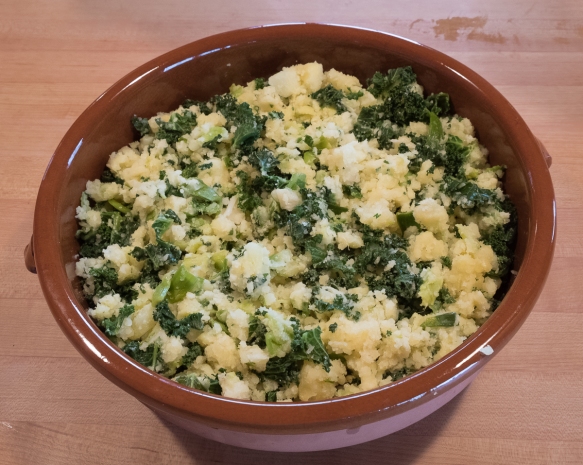 The cold has abated, but there are still bags of leeks in the fridge along with bags of collards, Brussels sprouts, arugula, radicchio and parsley.  And the roots and greens covered and left in the garden survived the cold.  We’ll use them all for parties ahead, warm times with friends as we move from winter to spring.