This winter’s kitchen garden has offered a steady supply of parsnips beginning when the deep cold of early December transformed these sturdy roots from starchy to sweet and continuing on through more freezes and thaws.  There’s one more row left to take us to spring so still opportunities to experiment with parsnips in the kitchen.  Lately I’ve discovered how tasty parsnips are with pork.  Roast pork with potatoes and parsnips is lovely but sausages and parsnips are really good too. 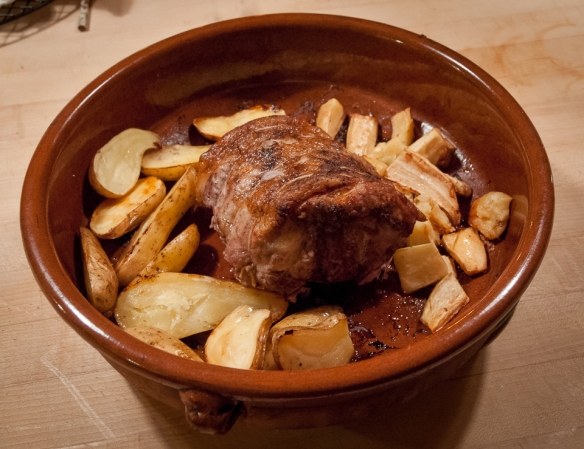 One recent evening I had some leftover roasted parsnips, some spicy pork sausage meat and dinner to make.  A quick Google search turned up a recipe for Orecchiette with Sausage, Chard, and Parsnips that confirmed my sense that sweet, caramelized parsnips and crispy fried sausage would be a great combination on pasta.  There was more red mustard than chard in the kitchen garden so I sautéed that in some of the fat left from frying the sausage, returned the sausage to the skillet, added roasted parsnips, heating for a few minutes until both were warm, then added the cooked orecchiette and served this delicious combination with lots of grated Parmesan.  I think the red mustard was actually a better choice than the chard.  Chard’s sweetness would have matched the parsnips’ while mustard’s spiciness joined with the sausage for a stronger sweet/spicy contrast.  My only regret is that I didn’t get a photo before we started eating.

With the memory of this delicious meal still in my mind and plans to experiment further with parsnips, pork and pasta, I was delighted to find Melissa Clark’s recipe for pasta and parsnips in the next morning’s New York Times.  She combined roasted parsnips, bacon and leeks with heavy cream, grated Parmesan and chopped parsley and served this rich sauce on bell-shaped campanelle pasta.  I substituted sausage for bacon, orecchiette for campanelle, red onion for leeks, and added fava beans for some green but totally followed her advice for reducing the cream until it thickened to a sauce around the sausage and vegetables.  This creamy version probably isn’t quite so healthy as the red mustard one but very comforting all the same.  I’ll make both again and will even follow Clark’s recipe exactly next time.  And I’ll try to remember photos. 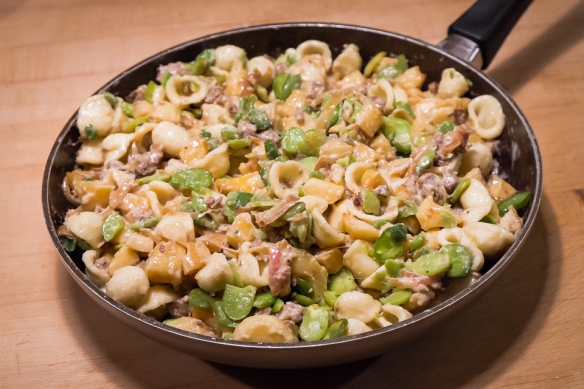 There’s one more parsnip and sausage recipe I want to try, this one from Nigel Slater’s Tender, A Cook and his Vegetable Patch (2009) p. 353.  He simply browns then bakes parsnips and sausages together with a little onion and stock.  It sounds wonderfully satisfying and a perfect meal for our lingering winter. 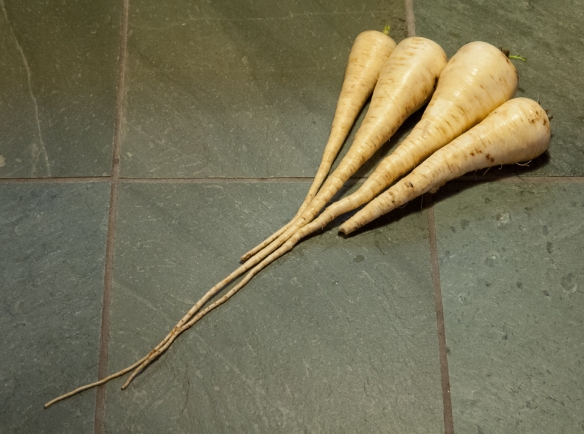 Another Supper of Young Parsnips and Sausage

A few sprigs of thyme

Peel the onions and slice them in half from root to tip, then cut each half into six or eight pieces. Soften them slowly in the oil in a flameproof baking dish or roasting tin over a moderate heat.

While they are softening, peel the parsnips and cut them into short, thick chunks, about the length of a wine cork. Add them to the onions and leave to color, turning up the heat a little if needs be. Remove the onions and parsnips from the pan.

Cut each sausage into three, put them in the pan, adding a little more oil if it appears dry, and let them color. Return the onions and parsnips to the pan. It is important everything is a good color before you proceed. Strip the leaves from the thyme and stir them in, together with the stock. Bring to the boil briefly, then put in the oven to bake for 35-40 minutes, until the sausages are cooked right through, the parsnips are tender and the stock has reduced a little.

Nighttime temperatures in the mid-twenties make me a little nervous about the fate of celery root and chard in the winter kitchen garden but very happy about the prospect of parsnips.  Of all the winter roots and hardy greens, parsnips most need real cold to sweeten up.  After a few nights in frozen ground, they go from bland and starchy to sweet and tender.

In New England, where I grew up, parsnips spent all winter buried under snow in the frozen garden.  We didn’t dig parsnips until early spring when the ground started to thaw.  Here in our temperate maritime northwest, parsnip harvest can come sooner.  I wait for a good hard freeze, a rather long wait this year, then a thaw, then I dig.

Digging parsnips is often a muddy event, especially if I want to get the roots out intact.  They’ve been growing since mid-June when I planted seeds of Lancer and Javelin, and now, seven months later, they’re deeply, strongly rooted.  Still, with a shovel and a digging fork and a little patience and luck I can extract these sweet roots from the mud, hose them off and bring them to the kitchen.

My mother served parsnips boiled and mashed with butter or stewed in chunks next to a roast or in a stew, all delicious preparations, but I’m more likely to peel them, cut them into strips or chunks and roast them. Coated lightly with olive oil, spread on a sheet pan, and roasted at 400 degrees for 15-20 minutes, they soften and caramelize into vegetable candy.  They are a lovely side dish on their own but their nutty, sweet flavor also blends perfectly with the sharper sweetness of carrots and the earthy flavors of rutabaga and beets to create a root vegetable medley.

Parsnips also pair wonderfully with kale, another of those winter kitchen garden vegetables that is tastier after a few mid-twenty degree nights.  I picked a basket of both the other afternoon and made a variation on a delicious-sounding risotto from a year-old David Tanis New York Times City Kitchen column: http://www.nytimes.com/2012/01/11/dining/risotto-with-parsnips-and-greens.html?ref=dining

I didn’t actually make risotto.  Instead, I prepared the parsnips and kale as Tanis directs, added some shell beans and served this vegetable mix on Einka, a whole grain einkorn that my friend Brooke Lucy of Bluebird Grain Farms (http://www.bluebirdgrainfarms.com/index.html) gave me to try.  It’s another ancient grain that Bluebird has begun growing and will offer for sale soon.  The kale and parsnip combination is earthy and sweet and I’m eager to make it again, perhaps using red mustard instead of kale to add a spicy, hot flavor to the sweet roasted parsnips and even making real risotto. 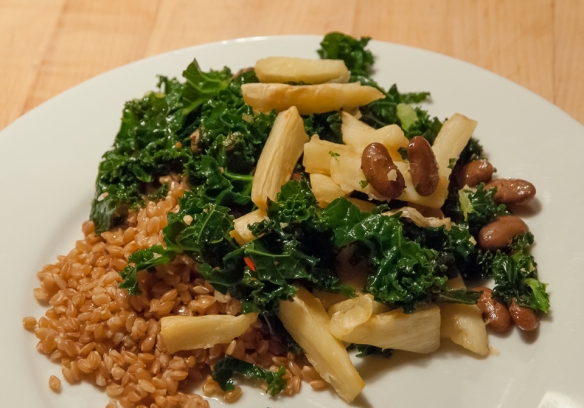 Hot spices like ginger and curries also go well with sweet parsnips. In a recent column, Tanis offers a curry recipe that includes parsnips: http://www.nytimes.com/recipes/1014468/Coconut-Chicken-Curry-with-Cashews.html and Nigel Slater includes parsnips in his root vegetable korma: http://www.goodtoknow.co.uk/recipes/398410/Nigel-Slater-s-root-vegetable-korma. For soups, Deborah Madison in her Vegetarian Cooking for Everyone offers “Parsnip Soup with Ginger and Parsnip ‘Croutons.’” All of these flavors play off the special sweetness of parsnips and promise tasty experiments and shared meals ahead.

Thinking once more of New England and the sweet parsnips my family welcomed in early spring, my fondest memory is of how much my father enjoyed sharing what he called “spring tonic.” One year he sent my visiting college roommate and her husband home with a bag full. She’s still a parsnip fan, forty years later.  And every year, he would take roots from the first harvest to Earl Smead, a dairy farmer neighbor who supplied cow manure each spring for our garden.  “Earl likes parsnips,” my father would say as he dug another dozen.  The parsnips were a thank you but also a chance for a visit. Even after Earl had turned most of the dairy farming over to his daughter Betty and spent his days sitting at the kitchen window, my father would stop by with parsnips and these two Yankees, one older, one younger, would welcome spring and talk.  My temperate northwest winter season differs a lot from New England’s cold winter but the delight in parsnips remains the same.

From: Vegetarian Cooking for Everyone by Deborah Madison

Cut two of the parsnips crosswise in half, then quarter each half lengthwise. Cut away most of the cores. Reserve the other parsnip. If you’re making stock, include the parsnip trimmings, cilantro stems, and one slice of the ginger. Brown the vegetables before adding the water to bring out their flavors.

Heat 2 tablespoons of the butter in a soup pot over medium heat, letting it brown a little. Add the vegetables, remaining ginger, and the coriander. Cook, stirring frequently, until the onion and carrots have begun to brown here and there. Add the rice and 1 1/2 teaspoons salt and cook a few minutes more. Add the strained stock and bring to a boil. Lower the heat and simmer, partially covered, until the vegetables are very soft, about 35 minutes. Remove the ginger, then purée the soup, leaving a little texture or not, as you wish. For a very smooth soup, pass it through a food mill or sieve. Thin if necessary with the milk.

Dice the third parsnip into little cubes and cook in the remaining butter in a skillet, stirring frequently, until golden and tender, about 8 minutes. Season with salt and pepper. Serve the soup with a spoonful of the parsnips added to each bowl. Garnish with sprigs of cilantro.