In the next few days, I’ll be planting beans, corn and squash in the kitchen garden.  I’m a bit behind my usual schedule because I’ve been traveling for the past three weeks, but I left the garden beds ready for planting so all I need now is a sunny day and, though this may be asking too much, some weeks of warm weather to speed germination and growth.

Beans, corn and squash, the three-sister trio often associated with Native American gardens, have always been part of my kitchen garden.  Though I’ve never attempted the Native American planting strategy of seeding corn in the center of a mound, surrounding it with beans that climb the corn stalks and finally surrounding these two with squash whose rambling vines encompass their sisters, I do take advantage of the synergy among these three vegetables both in the garden and in the kitchen. 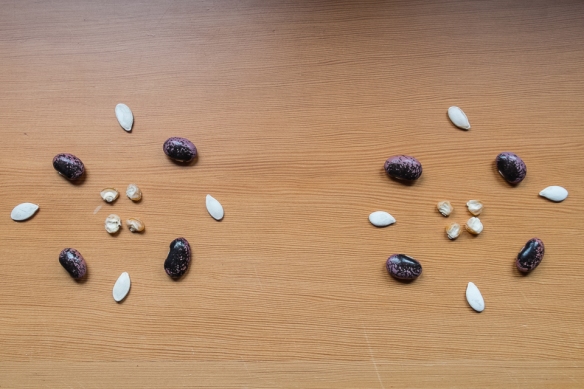 In my rectangular garden beds, I plant pole beans in one bed beneath a trellis of strings for climbing, corn in two adjacent beds, two rows per bed creating a block of four rows to encourage good pollination, and squash in one or two beds that give lots of space to vine and spread.  This year’s corn goes into the beds that held nitrogen-producing shell beans last year, an important rotation for healthy corn; pole beans go into a bed that next year can use the nitrogen beans provide; and squash goes into beds where its robust growth won’t overwhelm other vegetables.  Planting it next to corn beds where it can wander beneath the stalks is perfect.  The seeds in these photos are three favorites: Seneca Horizon corn, Sunset runner beans and Burgess Buttercup winter squash.

Three months from now, with very little work on my part, these small seeds will be massive plants.  Soon after that I’ll be harvesting the first corn and shell beans and, later, squash and dried beans. 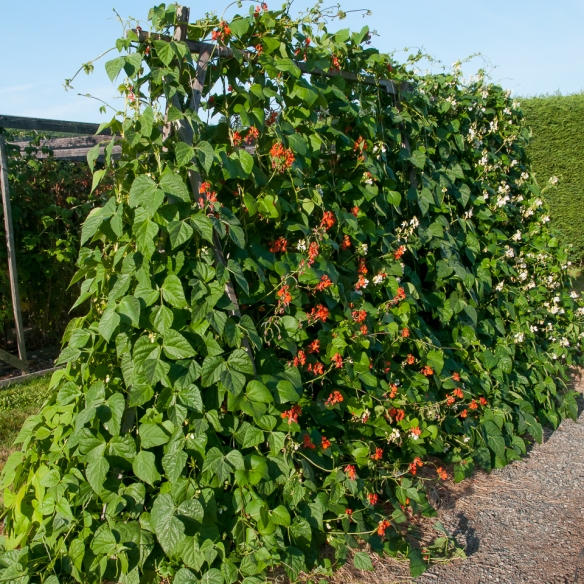 Beans, corn and squash are complementary sisters in the garden and they join together just as wonderfully in the kitchen.  Fresh succotash is only a dream at this point in the garden season but when it’s finally a reality, around the end of August, I’ll eat it every day at first.  Maybe it tastes so good because together corn and beans form a complete protein, but on my tongue the goodness comes from flavors and textures, slightly crunchy sweet corn and soft, rich beans. By late autumn, the winter squash will be ready to join corn that I’ve frozen and dried beans I’ll rehydrate in soups and stews, traditional three sisters meals that carry us through the winter.  But I get ahead of myself.  It’s spring and time to plant seeds.