We’re just back from three weeks of walking in the countryside and cities of Andalusia, Spain. Dramatic landscapes, complex history, friendly Spaniards and fellow travelers were all highlights of our trip. We also returned with very fond memories of Andalusian food.

On our village-to-village walks I watched for kitchen gardens and the vegetables growing in them this time of year. Onions, chard and early lettuce stood out against brown soil and in even in the smallest garden plots there were often stands of habas, what I know as fava beans and what the English call broad beans.

In larger gardens long rows of favas grew around almond and olive trees, some with blossoms and some with pods already formed, like those in the kitchen garden of Las Chimeneas, the inn and restaurant in Mairena where we stayed for a week while taking daily walks into the mountains and to surrounding villages.

Fava beans are one of our kitchen garden favorites here on Lopez Island, planted in fall or in early spring and harvested in June or July.

We serve them pureed for crostini or sandwiches and whole in pasta sauces or as side dishes, but none of these Italian and Californian preparations prepared me for Habas y Jamon, fava beans and Serrano ham, a classic Andalusian dish. The first night our hosts served it I was transported. There was the familiar earthy fava flavor but with a pleasant, faint bitterness from the skin still encasing the small, tender beans. Added to these flavors were the salty sweetness of the ham and the subtle flavors of onion, tomato and orange in the surrounding sauce. Familiar tastes yet a totally new combination. I wanted to eat it every night.

When I told our hosts how much I enjoyed this dish, they graciously offered to show me how to make it, adding this dish to the paella demonstration they’d planned.

Assisted by Emma on the right, Conchi began by adding nearly a cupful of olive oil to a large skillet, warming it as she sliced in a couple of onions and lightly softened them. Next she added two or three handfuls of thinly sliced ham, warming it briefly before chopping and adding several tomatoes, zest from an orange and finally several quarts of small shelled but not peeled fava beans. That was it. The mixture simmered back in the kitchen as she showed us how to make paella. Habas y Jamon was served as a side dish to the paella but for me it could have been the entire meal

With only peeled and frozen favas from last year’s crop and no true Serrano ham, I was still determined to recreate this dish. My first scaled-down version of Conchi’s recipe was very tasty, bringing back happy memories of the original dish.

I’m looking forward to this year’s fava crop and the chance to try some unpeeled beans from an early harvest. And maybe I can even find some real Serrano ham.

Asparagus was another spring vegetable we saw many times but not growing in gardens. Instead, in our walks along country paths, we saw long, thin stalks of wild asparagus in the arms and pockets of foragers.

These jolly foragers reminded me of the cookbook author and writer David Tanis’s story of eating wild asparagus in Andalusia in the spring. Tanis writes: “Long, skinny and ever so slightly bitter, Spanish wild asparagus has a deep green flavor. The best way to cook it, I was told, is sautéed in olive oil with garlic, then swirled with beaten eggs to make a revuelto…a kind of scrambled eggs.” The recipe he developed to accompany his story includes chorizo, green onions and a scattering of toasted croutons along with the eggs and asparagus.

Back home with asparagus from our kitchen garden, I followed his recipe. Though missing the wild asparagus and the wonderful pimenton-flavored chorizo of Andalusia, the dish was delicious and kept our food memories of Spain alive. 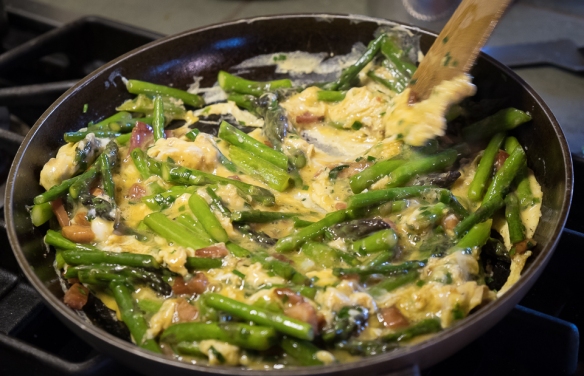